Evening Echo is a public artwork sited on old gasometer land gifted by Bord Gáis to Cork City Council in the late 1980s. This site was subsequently re-dedicated as Shalom Park in 1989. The park sits in the centre of the old Cork neighbourhood known locally as ‘Jewtown’. This neighbourhood is also home to the National Sculpture Factory, where Maddie Leach was artist in residence for two months in 2008.

Evening Echo was generated as an artist’s response to the particularities of place and locality. Now in its eleventh year, the project is manifested in a sequence of custom-built lamps, a remote timing system, a list of future dates, an annual announcement in Cork’s Evening Echo newspaper and a promissory agreement between the artist and Cork City Council.

Intended to exist in perpetuity, the artwork is fleetingly activated on an annual cycle maintaining a delicate but persistent visibility in the park and re-activating its connection to Cork’s Jewish history. Each year, the last night of Hanukkah offers the only opportunity to see the tall 'ninth lamp’ alight until the following year. The cycle begins 10 minutes before sunset, and continues for 30 minutes after sunset when the ninth lamp is extinguished.

Two pieces of printed matter were produced for Evening Echo. One is a poster listing fifty years of dates for the lighting of the ninth lamp. The other is a catalogue publish by the National Sculpture Factory with essays by Matt Packer and Mick Wilson. This booklet contains a sequence of still images exported from a VHS tape recording of the dedication of Shalom Park on 28 April 1989. Watching the tape, Leach discovered a remarkable prefiguring of her own proposal for Shalom Park — a moment in which Minister for Energy Michael Smith climbs a ladder and lights a single gas lamp in front of an assembled crowd. 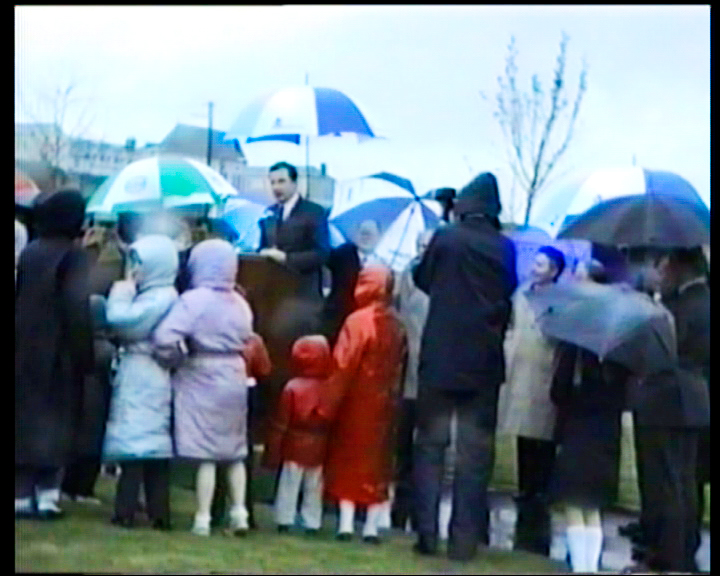